Equal Power Your Next Civic Role? Take on a Board Role

September 2020
On Wednesday 23rd September 2020MWNUK hosted an online event to encourage and support BAME women in applying for roles on public and private sector Boards. The event aimed to demystify  the different types of roles, the process of recruitment, responsibilities, and skills and experiences required to take on different roles. Our guest speakers were Penny Wilson (Getting on Board), Jessica Stockford (Prospectus) and  Simon McDonald (Odgers Berndtson UK) who provided  insider tips and advice on how to get 'Board ready'. Participants were also able to know on what to consider when applying for a charity trustee role, how to take on a board role, and on making applications for board roles.

Equal Power Your Next Civic Role? Become a Magistrate in England and Wales
September 2020
On Wednesday 9th September 2020 MWNUK delivered a session to explore the role of a Magistrate. Our guest speakers were Magistrate Shereen, Magistrate Shazia and Magistrate Sonal who discussed what Magistrates do, the time commitment, skills and experiences required to take on the role, and the process of applying. The speakers also shared their route into their role. We also heard from Magistrates about the importance of diversity, the skills needed, and the difference that can be made to children and families by becoming one.

Equal Power Candid Conversations: On being a MP and a woman and BAME
July 2020
On Wednesday 8th July 2020 MWNUK hosted a panel discussion with MPs from different Political Parties to explore their political journeys, the challenges/ and barriers they may have faced, and opportunities that have come their way. Our guest speakers were Naz Shah MP (Bradford West - The Labour Party) and Resham Kotecha. Participants were able to hear about their journey to Politics, the barriers they have faced and continue to face, and the tools/techniques they have used successfully.
To view the workshop please click here.

Equal Power - Candid Conversations: On being a Local Councillor, a Woman, BAME and Muslim 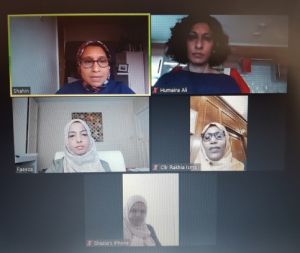 On Wednesday 1st July 2020 MWNUK hosted a panel discussion with local councillors from different Political Parties to explore their political journeys, the challenges/barriers they may have faced, and opportunities that have come their way. Our guest speakers were Councillor and Mayor Rakhia Ismail (Islington - The Labour Party), Councillor Shazia Bashir (Peterborough - The Conservative Party), Councillor Humaira Ali (Bermondsey and Old Southwark - The Liberal Democrat Party) and Councillor Shahin Ashraf MBE  (Solihull - The Green Party). Participants were able to hear about their political journeys, the additional barriers they have faced as well as opportunities that have come from being in politics.
To view the workshop please click here. 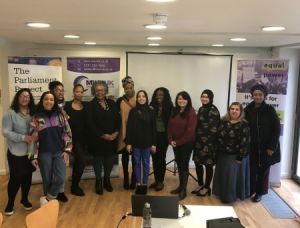 On the 28th February 2020, MWNUK hosted an event with the Equal Power Campaign and The Parliament Project, dedicated to helping BAME women overcome barriers they might face when pursuing civic and political roles. Participants learnt about the many civic and political roles available as well as how to get involved in politics. Our guest speakers were Councillors Alex Yip (The Conservative Party) and Jackie Taylor (The Labour Party) and Rachel Okello, who all shared their stories of how and why they got involved in politics as they answered questions from the participants about how to address BAME representation in their respective parties. 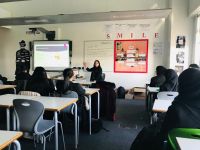 For years, MWNUK have delivered awareness raising training on issues such as domestic abuse, forced marriage, child sexual exploitation, unconscious bias and discrimination and female genital mutilation (FGM). Grounded in the lived experiences of Muslim women and girls in the UK, our approach not only defines each of the issues and its occurrence in the UK, but also includes faith and culturally specific factors, and data from the MWN Helpline.
We deliver to a range of stakeholders, including; schools and colleges, other frontline services, police teams, and other professionals.
In February 2020, Helpline Manager Shameem Hussain delivered awareness-raising sessions on FGM at a school in Birmingham . 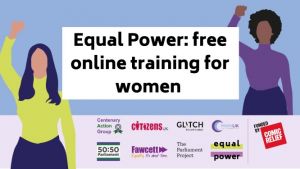 This three-year campaign, will be running an inspiring programme of training for women on how to successfully stand as an MP or local councillor, which includes peer support circles and mentoring opportunities to help build womens confidence. Equal Power is run by a coalition of women's and civil society organisations, including Centenary Action Group, Citizens UK, 50:50 Parliament, Glitch, The Fawcett Society and The Parliament Project and is funded by Comic Relief. Our Equal Power campaign was scheduled to run in Greater Manchester, London and Birmingham and the West Midlands, however with the pandemic we have moved our workshops online.
In this challenging political climate only 32% of our MPs and 35% of local councillors in England are women. Women who are BAME, disabled, working class, young or with caring responsibilities are substantially underrepresented. This is not good enough, womens voices must be heard.  The seminars MWNUK are delivering are being designed to include and overview of political pathways, and a really honest discussion with Members of Parliament from the Labour, Liberal Democrat and Conservative Parties. We will track the journeys of aspiring leaders to office and the barriers and discrimination they still face.
We will be running training for women who want to get more involved in grassroots activism in their local area or to put themselves forward for positions such as being a school governor or magistrate. Equal Power will also strengthen existing networks for women already in politics. Well be inviting women to campaign with us and help to tear down the barriers that keep women out of politics and public life.  We particularly want to centre BAME women, disabled women, working class women, younger women & those with caring responsibilities, all of whom are under-represented in national and local politics.

Mental Health Awarness Raising Workshop
November 2019
In November 2019, our board member, Dr Iram Sattar, Iram delivered a workshop to attendees from the Idara-e-Jaaferiya mosque in Tooting. Unfortunately, due to Covid-19 we have had to put training within the communities on hold and due to the nature of these particular workshops and the target audience, these cannot be held through online means. 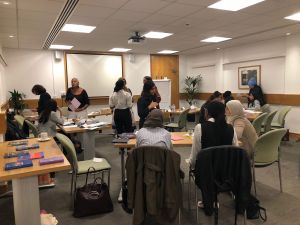 to help build the capacity of young women from Black and ethnic minority communities in the West Midlands and Warwickshire so they can become more active in political and civic life in order to bring about change. Eighteen young women were selected to participate in one day workshops spread over a 9 month period from June 2018 to February 2019.  The workshops are aimed at empowering women with knowledge and information about the UK political and civic landscape and how to overcome some of the barriers to participation. The workshops will include hearing from campaigning groups and politicians. Once the workshops have been completed the women will deliver their own small mini campaigns. 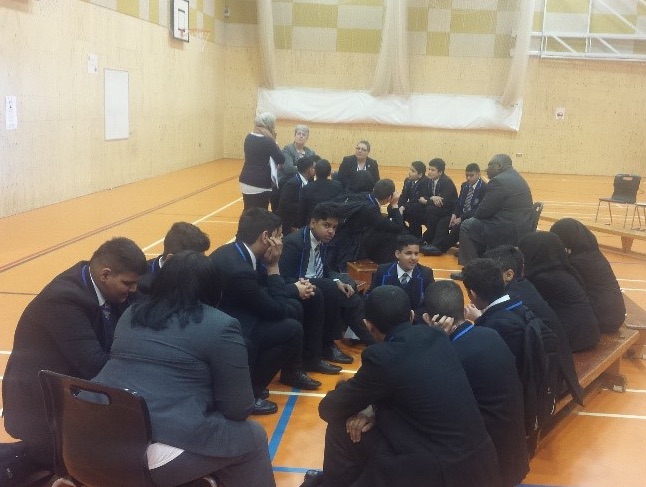 MWNUK was a delivery partner for FORWARD (through a Dept of Education grant) to raise awareness of FGM to pupils (boys and girls) in schools. This included what it is, statistics, consequences, spotting the signs, excuses used by families to justify it, the law and how and where to get help including the importance of disclosing and sharing concerns. Workshops were also delivered to teachers as well as men and women in the community. This awareness raising led to an FGM event in partnership with one of the local schools (St. Albans Ark Academy).  We delivered workshops in 12 schools and engaged with over 2000 pupils, teachers and people from FGM practicing communities. 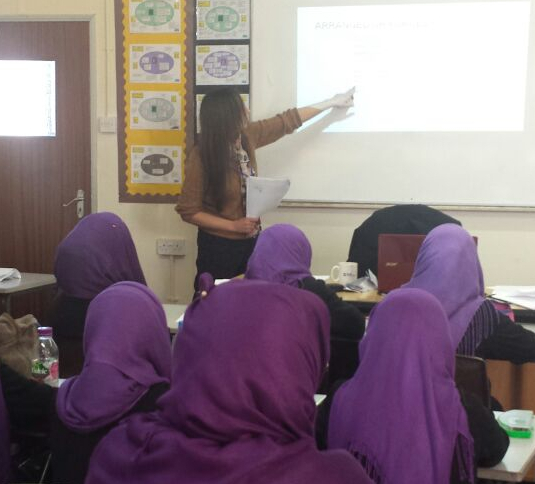 As part of MWNUK's ongoing commitment to raising awareness of issues affecting Muslim women in schools, these training sessions took place: On the 13 January, Project Managers Shahin Ashraf and Nadia Ilyas delivered workshops on Female Genital Mutilation and Forced Marriage with years 7/8 and year 11s at an Independent Girl's School in Birmingham. On the 16 January, Shahin Ashraf conducted an advocacy workshop to help capacity build Year 11 FGM Champions at St. Albans Academy in Birmingham. The group's 1st task was to launch a school wide competition to design a logo for the upcoming 'Summit on FGM' event.

Violence Against Women and Girls - Birmingham
November 2014 to March 2015

ered a number of workshops in partnership with Small Heath Community Forum in Birmingham. Topics includes domestic violence, forced marriage, honour based violence, child sexual exploitation and child sexual abuse in the family environment.   These are being delivered to women's groups, colleges and schools etc. A ground breaking workshop was also delivered to black cab taxi drivers in Birmingham on the
issue of CSE and grooming, and how taxi drivers
can play a part in tackling the issue. 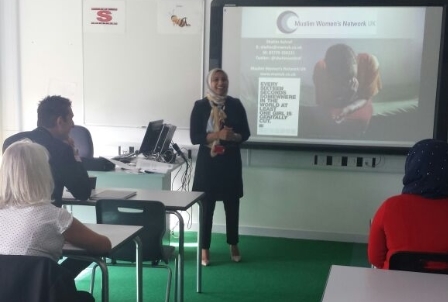 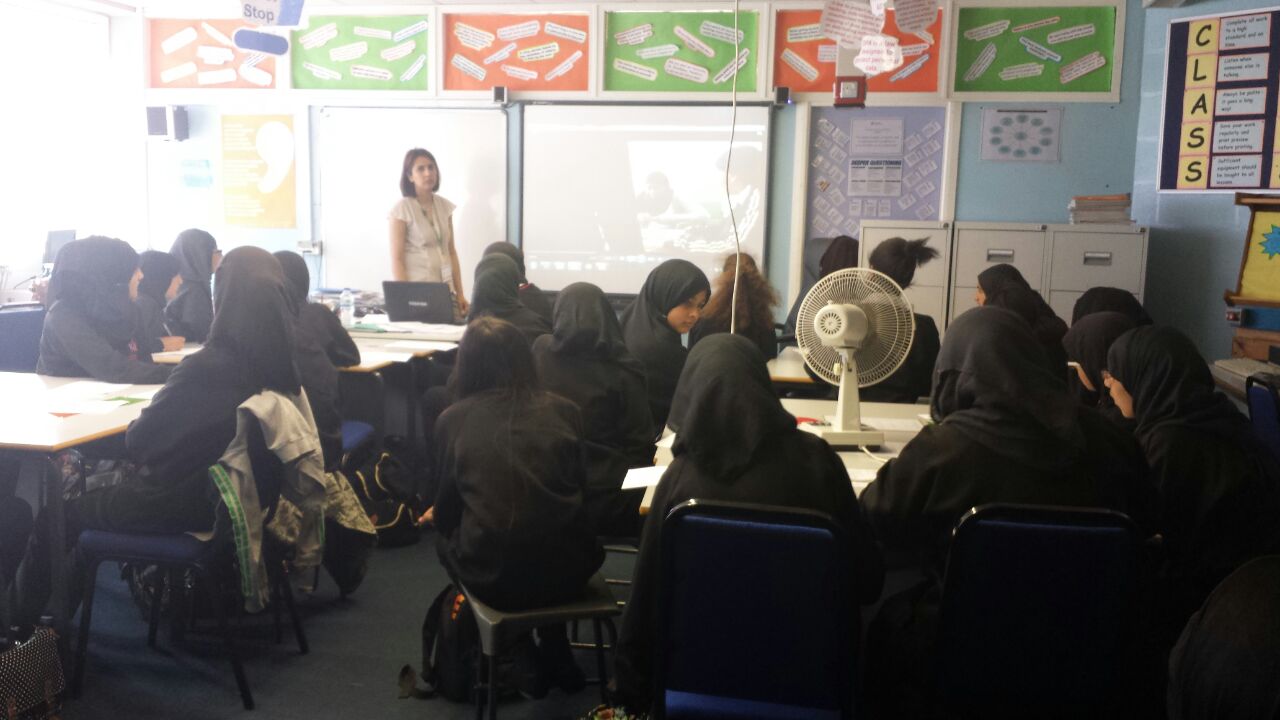 MWNUK Chair, Shaista Gohir delivered a  workshop  to year 7 girls (  11 to 12 year olds  ) at a secondary school in Birmingham, on female genital mutilation (FGM)  .  The presentation was modified to suit this age group.  The discussion covered:  different types; affects of FGM; prevalence; myth busting; what the law and faiths say; how to raise concerns.

MWNUK Chair, Shaista Gohir delivered a  workshop  to year 10s (  14 to 15 year olds  ) at a secondary school in Birmingham.  Girls were informed about different types  civic participation  such as voting; engaging with decision making and getting involved in various types of voluntary roles.  The girls also discussed what makes a good role model and who their  roles models  were. 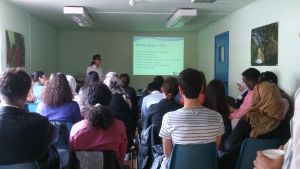 In October 2013, our board member, Dr Iram Sattar, held a mental health workshop in London for the Inclusive Mosque Initiative.  The event was a success and feedback included gaining knowledge about the different types of mental health issues, the symptoms, stigma, treatment, and how to seek help.  The session also touched upon 'jinn' possession.

A campaigning and Advocacy workshop was delivered by MWNUK Chair Shaista Gohir at the National Feminista Conference in August 2013. 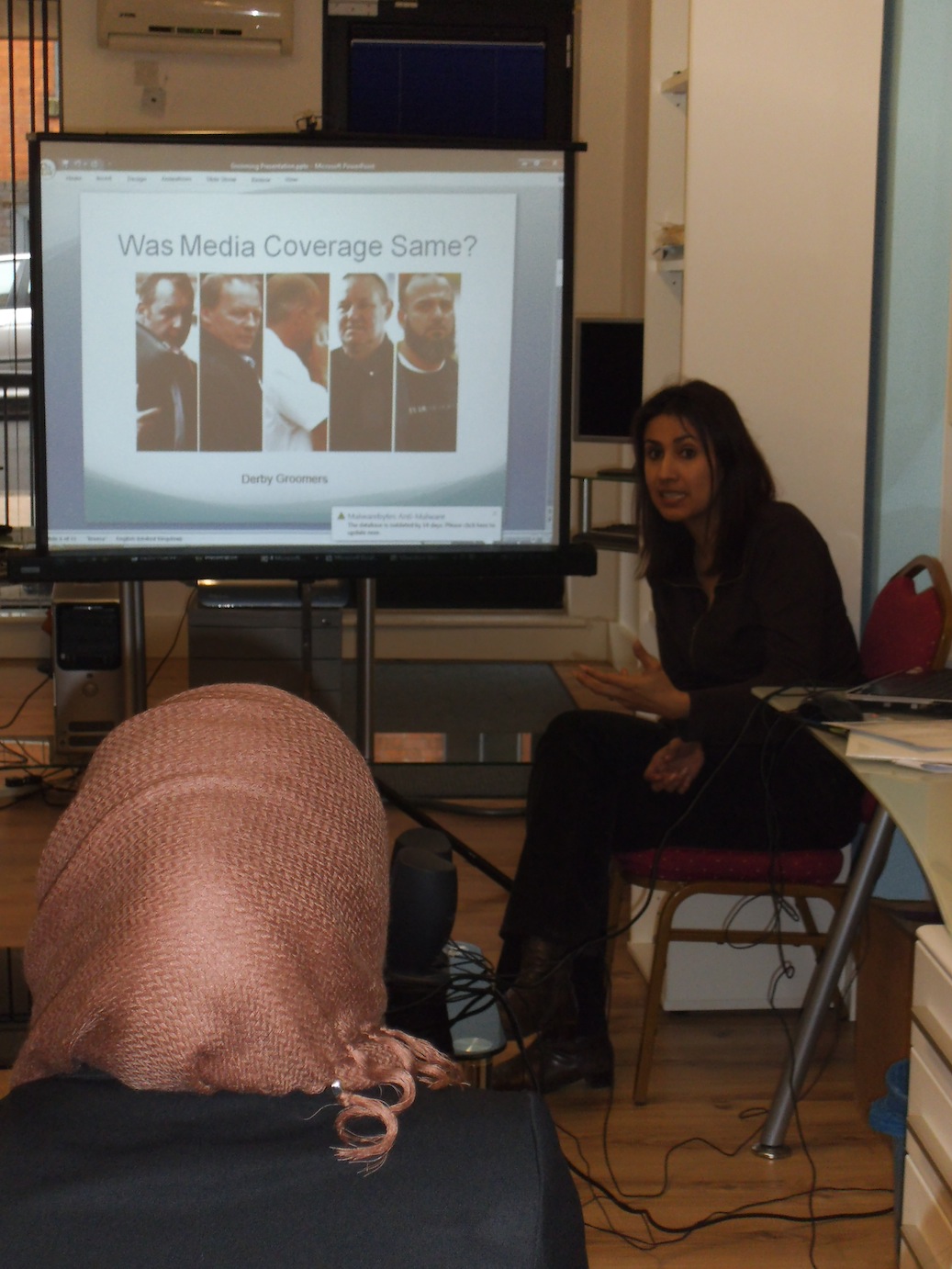 On the 29th May 2013, MWNUK held a workshop aimed at young activists.  Issues covered included awareness raising presentations and videos  on domestic violence, sexual violence and forced marriage.  The session also included advice on how to campaign and share information. 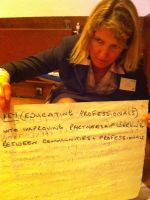 MWNUK are a member of the NSPCC National Muslim
Advisory Group that meet to provide input on safeguarding Muslim children.   We were involved in helping shape the first national NSPCC conference on Safeguarding of Muslim children which was held in London on 17th March 2011and aimed at front line professionals working with Muslim communities.  Shaista Gohir, Executive Director of MWNUK facilitated the workshop on 'cultural practices that can amount to child abuse.' We are continuing with our partnership working with the NSPCC and now exploring ways of raising awareness amongst Muslim communities of child sexual abuse. 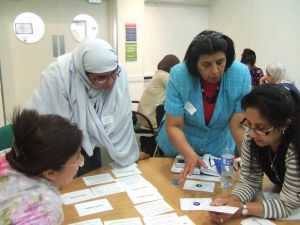 In partnership with Parliamentary Outreach and the University of Warwick (and in part sponsored by Economic Social Research Council), a national workshop was held to help Muslim women to understand how parliament works and how they can influence decision making.

You can view photos from the workshop here. 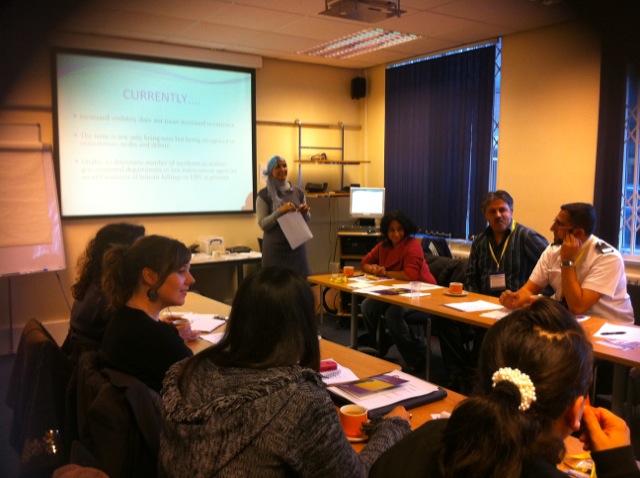 We organized a national workshop in partnership with Practical Solutions and West Midlands Fire Service on forced marriage which was delivered to front line professionals. 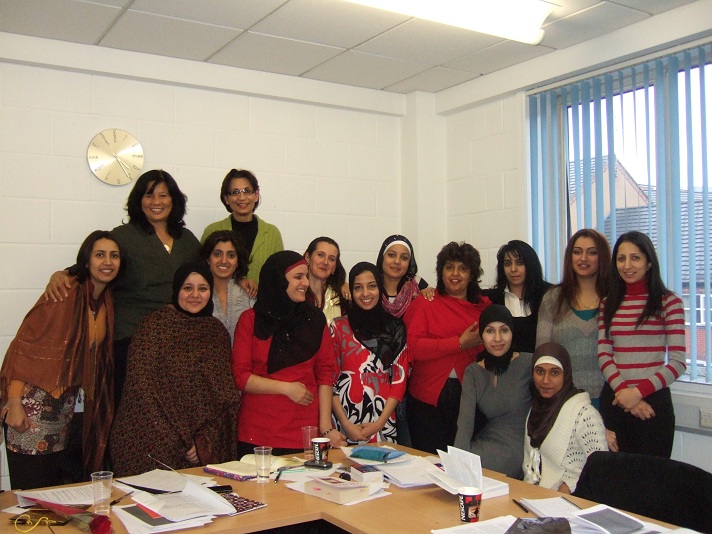 We conducted a 5 day training workshop in collaboration with international experts to empower Muslim women by exploring the principles of equality and justice.  The workshop was held in March 2008 in Leicester and attended by women from around the UK.