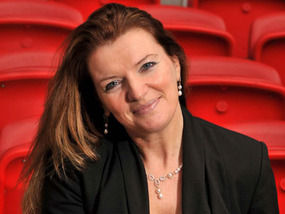 Janie has been invited by the board of trustees to become Muslim Womenâs Network UK first Patron to help us broaden our work to include sports and well being. Given Janieâs knowledge, areas of specialism and experience of working with Muslim girls and women, she will be helping us to use sports as a conduit to address current issues faced by them, give them confidence and empower them so they feel valued to improve all aspects of their lives.

Janie has been an active football referee for 26 years, and became the second women to have operated within menâs professional football. She has officiated in many International matches, including the Womenâs Champions League and World Cup Qualifiers, as well as the highest womenâs games domestically.

As a qualified UEFA B coach she spent several years in America coaching football, and was also involved domestically in The FA Womenâs Centre of Excellence coaching and development initiative before being appointed by The FA as one of 10 Regional Referee Managers in 2001. Janie was promoted to The FA National Referee Manager for Education and Training in 2007. She has a vast experience in referee development both domestically and internationally having delivered education to grassroots through to elite referees on every continent.

Janie is also the Owner and Managing Director of Sports Officials Consultancy, a development partner of Sport England, and an umbrella organisation which supports the education and development of sports officials across all sports.
Janie has been working with Muslim Women from Asian communities to engage them to take part in sport in a positive, safe, enjoyable environment without compromising their culture. To support this Janie was invited to be part of a working group with the Asian Football Development Project in Jordan and Chaired by Prince Ai Bin Al Hussain to lobby FIFA to overturn the ban on âThe wearing of the Hijab in Footballâ the group were successful and the ban was lifted  by FIFA in June 2012. Continuing her involvement in the development of Muslim women, Janie has undertaken several projects involving premier league football clubs and the PFA where we have delivered a range of leadership programmes to empower young Muslim girls and women to build their confidence and self esteem.

In 2017, Janie plans to take a project to Iran later in 2017 to empower young girls and women using football as the conduit.